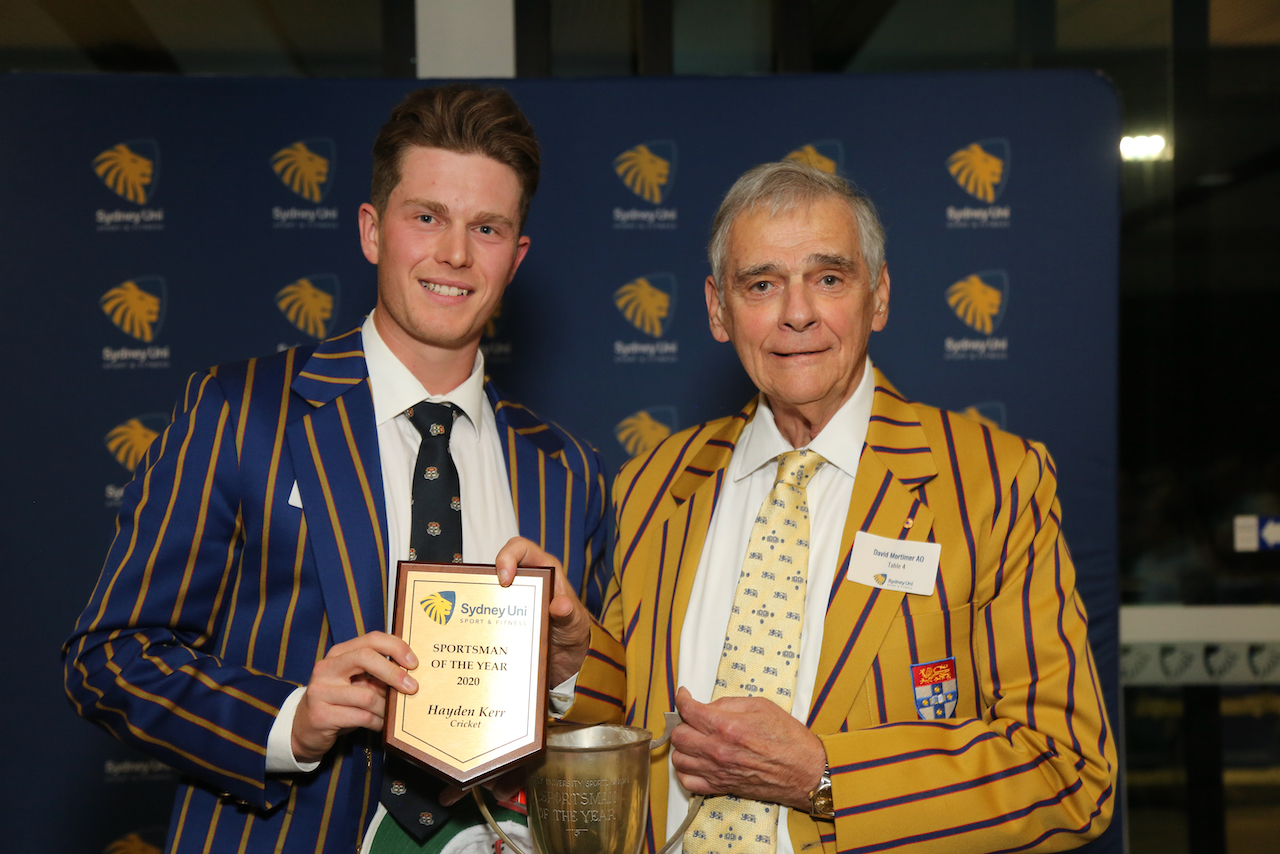 Your 2020 SUSF Award winners have been named

On Wednesday, 28 April 2021, a smaller than usual group of Sydney University sporting clubs, administrators, athletes and friends of Sydney Uni Sport & Fitness gathered in the TAG Family Foundation Grandstand Function Room to recognise winners of the SUSF Awards for 2020.

Read on for the award finalists and winners, and a big congratulations to all on a challenging but impressive 2020.

Vice-Chancellor’s Participation Program of the Year

This award celebrates a program within a club or department that has provided a great opportunity for students and increased the students’ potential to have the ‘ultimate experience’ on campus. The program must be focused on participation as much as it is on health and competition. There is no denying the team behind 2020’s Intercollegiate Sport Competition (also known as the Rawson Cup and Rosebowl Cup) did just that.

Pinned as one of the oldest and most prestigious sporting competitions in the country, Rawson and Rosebowl provide the opportunity for over 2,000 students to represent their College as they battle it out in 10 different sports across two semesters. It is tribalism in its purest form.

When COVID hit in March 2020, only the cricket competition of the Rawson Cup had been completed. By the time the restrictions were being lifted, and the College students were back, it was early semester two and, under the request and guidance of the Intercol Sports Committee, the SUSF Programs team worked hard to re-schedule the 9 remaining sports competitions to be played over the nine remaining weeks of semester 2 and under the tightest of COVID restrictions.

The Intercol Sports Committee played a pivotal role in assisting the SUSF Programs team in achieving this challenging task. Significantly, for the first time in the history of the tournament, SUSF was able to provide a live stream service using college students as our light-hearted commentators.

The award is presented to an individual who has made outstanding contributions on a volunteer basis to a constituent club of Sydney Uni Sport & Fitness. For his significant contribution in 2020, Mark Curzon from Sydney Uni Lawn Tennis Club achieved this honour.

Mark focused on the top two standards at the club – the Premier League and the 1.1 Level. His strategy to grow the elite men’s group which will trickle down into the upskilling of lower levels, has been a great success. Aside from this and whenever he can, Mark is on the court having a hit with prospective members. His duties include game-day management, but much of Mark’s time is supporting players and offering post-or-pre-match guidance.

Pat Sharp award for Female Club Administrator of the Year

2020’s award was presented to Zoe Naylor from Sydney University Netball Club for her outstanding contributions on a volunteer basis.

Zoe has been a part of the SUNC Executive since 2017 and since then has been the Secretary, Treasurer and from 2019 took on the role of President. She has done these while playing top-level netball.

Under Zoe’s leadership, the club has been established under the Inner Western Netball Association. She’s selected teams for competitions, recruited umpires, set up pin payments and stripe account to facilitate registration fees, helped design and launch new apparel, which has created a new revenue stream for the club and created a new financial system that helps manage the general finances of the club.

Professional Administrator of the Year Award.

JoAnn Matruglio from Sydney University Water Polo Club took out the prize, having significantly contributed to the Clubs success in 2020. This included merging all financials, budget preparation, organising training and team allocations, coaches’ contracts, creating schedules for players and successfully registering teams into their respective competitions.

JoAnn has introduced a more structured and organised environment for the club to be successful and helped hugely in preparing both clubs to merge.

Club of The Year Award.

This is awarded to a non-premier club that has had an outstanding performance on and off the field or court. Sydney Uni Canoe/Kayak Club claimed bragging rights for the COVID-stricken year.

The club was fantastic in engaging and pivoting COVID. As soon as they could be on the water, they were engaging the students and community members, all the while being incredibly compliant and administratively efficient.

Following club closure due to the pandemic, the club resumed activities at full force with four regular flatwater/sea kayaking trips running weekly from the Glebe Boatshed. The club spent around 25 days over the year hosting whitewater activities across several rivers around Sydney and further afield to the north of the state.

Premier Club of the Year Award.

2020 was SUHC’s most successful season yet. On the women’s side, the top five women’s grades all played in the grand finals, with 1st, 3rd, 4th and 5th grade all winning the premiership. Both the 1st and 5th-grade sides were undefeated all season, and both teams also only had four goals conceded against them in the regular season. This incredible result saw SUHC awarded the Club Championship award for the most successful club in the Sydney Women’s Hockey League.

The men’s side of the club also had one of their most successful seasons yet, with 1st, 3rd and 6th grade all qualifying for semi’s; however, unfortunately, all three teams did not progress any further. The master’s 1st-grade team also scored a birth in the grand final and lost in a shoot-out at the end of regular time.

In 2020 SUHC had 264 members playing across 14 teams. This included 8 women’s teams, 6 men’s teams, 4 masters’ teams and 2 juniors teams. Given that only half the regular season went ahead, membership was only slightly down from 2019.

In February, SUHC, along with the UNSW Hockey Club, hosted a Bushfire fundraiser event with proceeds donated to Red Cross and WIRES wildlife rescue. The event consisted of a social competition as well as Men’s and Women’s premier games. A raffle and silent auction were held on the day, which raised a total of $6,260.

Coach of the Year Award.

Eric Hu was awarded this honour, having been recognising for his role as a longstanding coach and executive for the Archery Club.

Noteworthily, Eric coached a team of brand-new archers to win 9 medals in a national tournament after just 4 months of training.

Eric provides the club and its team members with custom equipment that he built, such as target frames, storage equipment, and archery equipment going above and beyond the club coach’s expectations. He is always willing to help and is fantastic with new archers and provides great coaching to the more experienced archers in the group.

Premier Coach of the Year Award

Tom Morrison led SUANFC to victory in the Men’s Premier Division in 2020, for the first time in 28 years. After just falling short for the past 3 years, with narrow Grand Final losses, Tom’s leadership and expertise got the boys over the line in 2020 and allowed SUANFC to finally raise that Premiership Cup in the air once again.

Tom has played an essential role in mentoring and relaying knowledge to coaches club-wide, contributing to the 6 teams who made Finals in 2020 and helping players from within the team sign to clubs for the VFL-East Coast Competition’s 2021 season. Tom assists in mentoring other coaches within the club – holding regular education and development sessions for all coaches.

From recruiting players to building sponsor networks, Tom plays a strong role in all aspects of club administration and pathway programs. He additionally works with the old boys and alumni to help players find placements and jobs where possible.

Sportswoman of the Year

Hannah is in the Australian Stingers water polo team who played in the 2019 World Championships, with Australia placing 3rd. She also played for the stingers in the USA v Australia series in January 2020, where Australia won the series 2-1. Thanks to her strong performance, she featured in the ‘Best Players’ list for the series.

Hannah was a key player in Sydney Uni 1st grade competition, where the Students won silver. She would have represented Australia at the Olympics, but these were unfortunately postponed until 2021. To her credit, she has managed to combine study in a demanding course and yet compete at the highest level in water polo competition.

Sportsman of the Year

Hayden Kerr performed extremely well in the 2019/20 Season and has undoubtedly transitioned into a leading senior all-rounder in all formats for the club.

The above awards recognise the highly successful season Hayden had for the club, and these were ultimately rewarded with debuts for the NSW Blues in the Marsh One Day Cup vs Tasmania in Hobart and Sydney Sixers in the Big Bash Tournament.

Hayden has matured into a fine young man who is proudly associated with Sydney University and the Cricket Club. He is said to be extremely helpful around the club with the younger players.

Congratulations to all nominees and award winners.