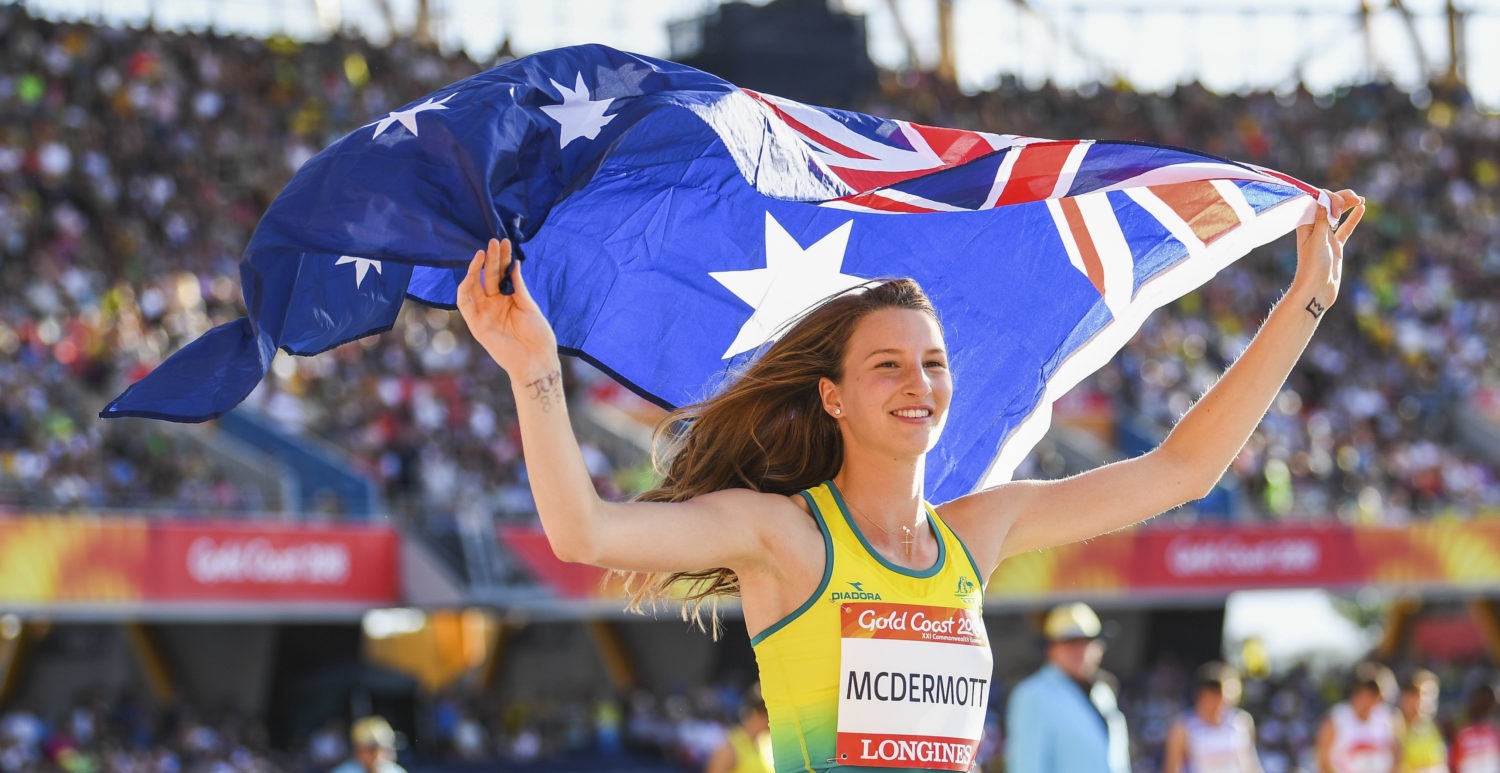 Shooting for the stars is part of Nicola McDermott’s DNA.

Since winning the girl’s Under 10 NSW Little Athletics high jump championship with a leap of 1.36m in 2006, she’s equalled or bettered her personal best every year.

In a coronavirus interrupted 2020 she nailed 1.98 at an athletics meet at Sinn, Germany, on August 29 ranking her fourth in the world of women high jumpers. That jump also equalled the former Australian record, jointly held by Vanessa Ward and Alison Inverarity. Eleanor Patterson set the Australian high jump mark when she cleared 1.99m at the Capital Classic track and field meet at Wellington, New Zealand in February this year.

Patterson and McDermott have been friendly rivals since their junior days, pushing each other to become the first Australian female to clear 2m. On her way to the 1.98m mark, McDermott cleared 1.91m to claim a bronze medal at the 2018 Commonwealth Games held on the Gold Coast, and bettered that with a 1.96m leap at Mestsky Stadion, Ostrava, Czech Republic in June 2019.

Her schedule in the next two years includes the postponed Olympic Games, to be held in Tokyo next year, and the 2022 Commonwealth Games in Birmingham followed by the World Championships in Oregon, USA, which have also been delayed by the pandemic.

Following the Rome Diamond League event in September, Nicola became stranded in Europe due to travel restrictions and finally returned home via a quarantine in Adelaide on her arrival back in Australia, in late October. During that time she kept in touch with her coach Matt Horsnell, who has trained her at Gosford since she was an 11-year-old. She concentrated on strength work and is now in focusing on the Olympic trials in April 2021. Nicola has already met the Olympic qualifying height of 1.96m.

“When I look back, I guess most eight-year-olds are not thinking about one day jumping two metres in the high jump,” she says. “But back then I was tall for my age, and I had these long legs. My parents put me through a lot of different sports as a child. I had tried swimming, surf lifesaving and tennis and I was useless.

“But it was a school athletics carnival that determined my future. I won pretty much every event that day. Dad then took me to Little Athletics and high jumping became my sport. I loved jumping over the bar and landing on a mattress. I was nine years old when I jumped 1.36m at the NSW Little Athletics Championships and that’s been in my memory bank ever since.”

Nicola has been coach by Horsnell since then. “Matt and I are good mates and on the same wavelength,” she says. “He’s very laid back about the way I train and approach events but we’re very determined individuals so we don’t cut corners. 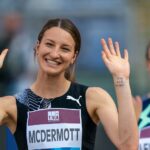 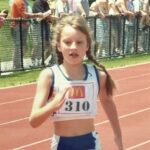 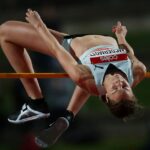 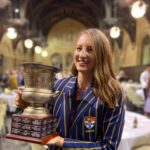 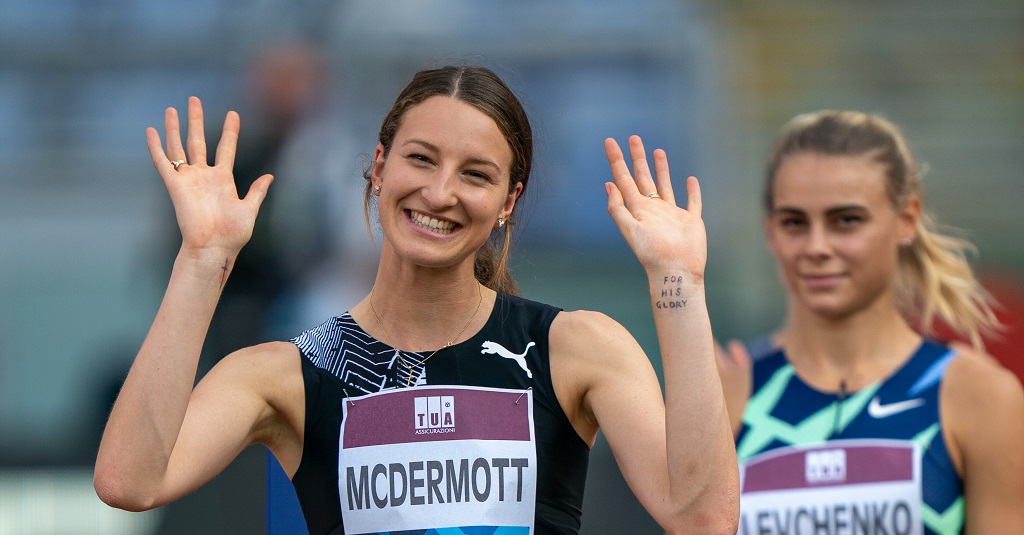 The ’10-year plan’ saw Nicola become a regular medallist at Australian Junior Athletics Championships. She was a multiple state age-group champion, although success on a national level was often denied by Patterson – six months her senior – who in her teens secured the 2013 world Under 18 high jump title and 2014 Commonwealth Games crown.

Along the way Nicola was selected to compete at the 2014 IAAF World Junior Championships in Eugene (USA) where jumped 1.79m but missed the final. Nicola raised her bar to 1.88m in winning bronze at the 2015 Australian Under 20 Championships and in 2016 she joined the Sydney University Athletics Club, having enrolled at the University to study for a Bachelor of Sciences degree in biochemistry.

That allowed her to compete at the World University Games in Gwangju, South Korea, where she placed fourth, jumping 1.80m in a typhoon. Although she missed qualifying for the 2016 Rio de Janeiro

Olympic Games, she did equal her lifetime best – at that time – of 1.88m at the Eberstadt high jump meet in Germany during a trip to Europe. “I was like a kid in a lolly store,” she said. “It was the first time I’d competed to a slow hand clap or jumped to music. It was an atmosphere I’d never experienced in Australia,” she said.

As she told Steve Landells in a World Athletics interview, the trip was also special because for the first time she visited Croatia, the birthplace of her maternal grandparents. Nicola, who stands at 1.86m, believes her height comes from her Croatian genes and given her roots she understandably holds two-time world indoor and twice world outdoor champion Blanka Vlasic in high regard. “She’s always been a big inspiration to me,” she said. “I remember in the days of the old dial-up internet, the only time I was ever allowed to watch YouTube was when Blanka was competing.”

Nicola raised the bar to 1.90m over the 2017-18 seasons and earned a discretionary selection for the Commonwealth Games at Carrara Stadium on the Gold Coast where she won bronze with a personal best of 1.91m. The medal justified her selection – ahead of Patterson – for the Games. “It was so good to win a first medal on the international stage; I thought ‘I can get used to this’,” she said.

After competing on the European circuit she returned home and took a month off to set her goals for the 2019 season. During discussions with her coach Matt, they decided to change her approach to the bar from 10 steps to nine.

“When you run fewer steps it makes it more speed oriented to generate more speed and power at take-off,” Nicola said. “With the 10-step approach I often took off too close to the bar, although I knew adopting a shorter run-up would mean having to change from a speed to a power jumper. I’ve had to become more powerful at take-off. Like the pole vault, it’s all about physics.” Nicola had dabbled with pole vaulting as a 14-year- old but soon decided her future was with high jumping.

The strength and conditioning program resulted in a PB of 1.94m in Canberra followed by a leap on 1.96m in Ostrava in June and a 1.94m effort in finishing third at the Monaco Diamond League. “I surpassed my goal that I’d written down at the start of the year, which was to jump 1.95m,”she told Landells. “It was a dream season.”

While 2020 has posed unique challenges, Nicola has used the time out of competition to continue her strength program, which has included tough session running and jumping on the beach. “I trained really hard during the lockdown restrictions in NSW,” she said.

She was allowed to fly to Europe to compete in August and September and the hard training paid dividends with a win in Brussels and top three finishes in Stockholm and Rome Diamond League. And then came the 1.98m jump in the German town of Sinn taking her to second on the all-time Australian list. Nicola said achieving PBs every year has been a team effort, starting with her coach Matt who has kept her focussed and continue to enjoy the sport and competition. “He’s an inspiration,” she said.

“Since joining the Sydney University Athletics Club I’ve been on a Sports Scholarship in the Elite Athlete Program. The program and staff have been absolutely helpful. There’s no way I could have completed the program I have without their support. When you transition from high school to university your progress usually decreases. My progress has been on an upward spiral under the EAP.”

Joining the SUAC also brought Nicola in contact with Dean Gleeson, the Club coach. “Deano and the Club have been amazing,” she said. “His support has paved the way for me to compete at the next level. It’s a great club and it’s no surprise they’ve won nine NSW Club Championships in a row. Deano goes above and beyond to assist. As have my coach Matt and team. I wouldn’t be at the level I am without them.”

Having bettered her PB every year, Nicola is looking forward to competing in 2021 with her new nine-step approach. “It was a dream to clear 1.98m at Sinn in Germany, but it was also good to attempt 2.01m with confidence,” she said. “I would love to extend my PB streak and jump two metres. My ambition is to try to jump two metres in every competition next year, including the Olympic final. If that wins me a medal, then I’ll be stoked.”

Keep shooting for the stars, Nicola.