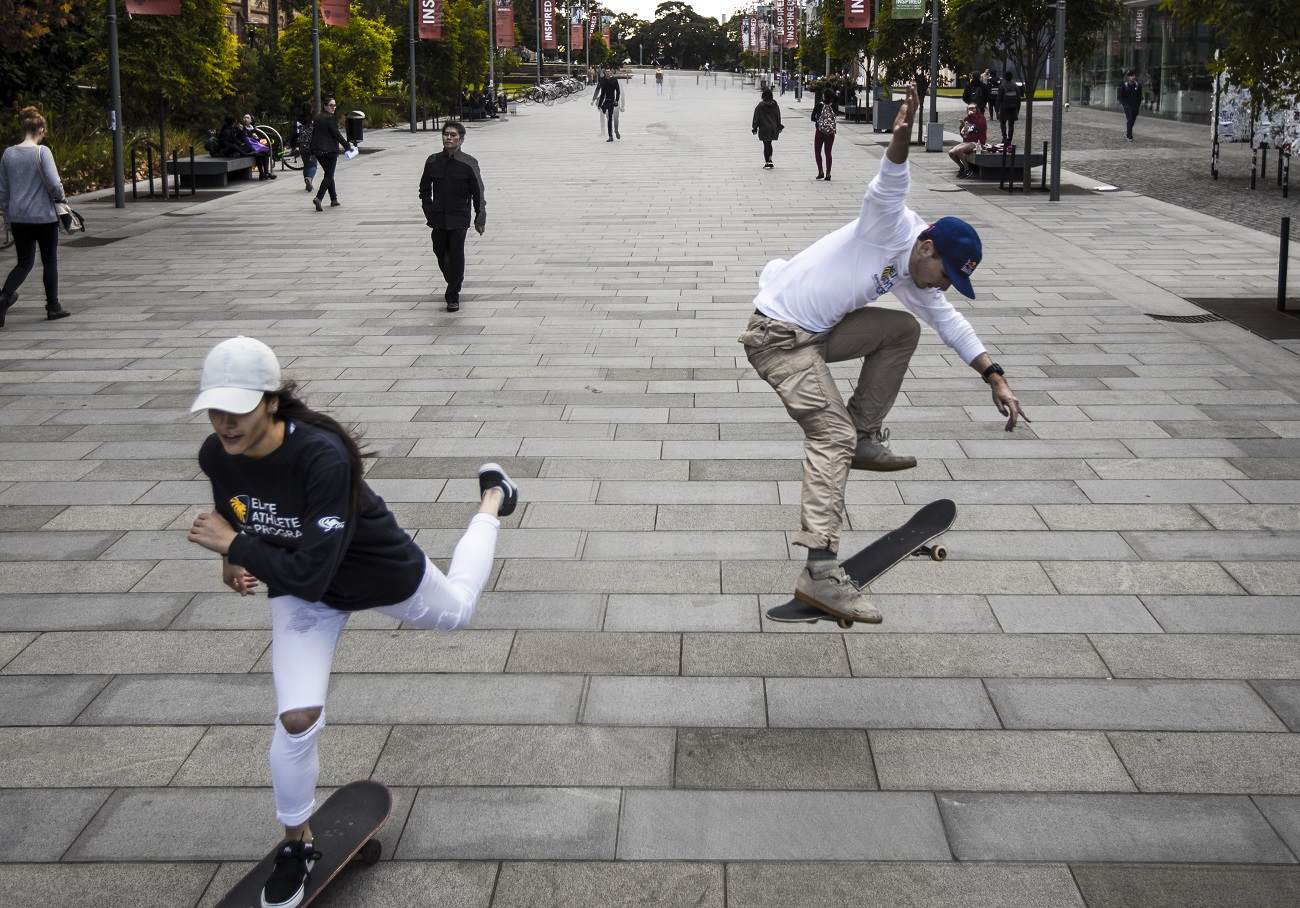 What is skateboarding? Well, it depends on who you ask. An action sport, a commercial enterprise and a recreational activity are among the more popular answers. But how about the pathway to a sporting scholarship at the University of Sydney? Nicole Safi introduces us to Mikey Mendoza and Amar Hadid.

They’re two young Aussies who have redefined what it means to be an academic athlete in 2017, this year being named recipients of an Australian-first scholarship for Skateboarding at the University of Sydney.

Since 1991, the program has helped academic athletes excel in both their sport and study, assisting the university in servicing athletes enrolled at the university, or representing it in their chosen sport. It provides access to a number of benefits and services including financial assistance and academic advice; tutoring and high performance services.

Energised by the opportunity to combine a tertiary education and skateboarding career, Amar, 18, and Mikey, 20, have become staunch advocates of the program.

“The program brings together a diverse range of athletes and creates an environment for us to learn, improve, succeed and encourage each other to grow in our sport, and our studies and as individuals,” Amar explained.

Skateboarding wasn’t always Amar’s sporting focus, developing a serious knack for soccer in her early teens. She even met with the University of Sydney’s Director of Soccer to discuss her future in the sport.

“I was at a crossroads and faced a difficult decision,” she said. “Soccer is a beautiful sport, but skateboarding gave me the personal challenges that I needed.”

As well as her love of skateboarding, Amar has used her platform as a young female athlete, and an Australian-Muslim, to promote diversity and empower young people across the country to realise their potential.

“Being given this privilege is a responsibility,” she said. “I want all female skateboarders to be given a fair go all over Australia.”

Mikey’s passion for skateboarding began a little earlier than Amar’s – at age six, in Mudgeeraba on the Gold Coast.

“I begged my mum to buy me a skateboard for Christmas after seeing it in the Xgames on TV,” he said. “It was a lime green skateboard straight out of Kmart.”

He says a number of Gold Coast-based skaters helped him realise skateboarding was something he wanted to pursue professionally, going on to compete in a string of world championship events across the globe before being offered a sponsorship opportunity by Red Bull.

This competitive experience led Mikey to the university’s program. “I did my research online and realised that as a skateboarder, I too should be recognised for my commitment to the sport in a professional sense.”

The Elite Athlete Program provides Amar and Mikey with a suite of high performance services including elite training programs, coaching, sports psychologists and nutritionists, as well as full access to its sporting facilities.

“An athlete can be very talented, but without the proper management, coaching and support, an athlete isn’t complete,” Amar said. She explained a few weeks of training at the Sydney Uni Sport & Fitness’ David Mortimer High Performance Gym made an immediate difference to her skating.

“I feel fitter and lighter on my board, which allows me to confidently learn new tricks and further improve myself.”

Mikey agreed, saying the Strength & Conditioning coaches at SUSF have helped him with injury prevention and to meet and exceed his overall fitness goals.

In addition to the program’s support of Amar and Mikey’s sport and fitness, it is equally committed to its member’s excelling in the classroom.

Mikey, who is studying a Bachelor of Arts in Management and Economics, says the Elite Athlete Program helps to ensure his academic performance remains up to scratch while pursuing a heavily committed skateboarding career.

“Travelling and skateboarding often go hand-in-hand, and sometimes assessment dates fall on the dates that are vital to your skateboarding,” he said.

“Extensions or special consideration allows me to work with the Uni on my assessments and not have to lose out on opportunities that only come around once.”

Amar, also an Arts student majoring in Biology and Arabic, says the program provides athletes with academic counselling, tutoring and helps her arrange special consideration and assessment extensions with the University.

What is most striking about Mikey and Amar is their genuine support of one another.

“Amar’s journey alone has inspired many young women to never settle for less,” he said. “Skateboarding has historically been a largely male dominated sport, but the women’s part in skateboarding is completely equal to that of men.”

“As a female, Muslim skateboarder, Amar is the personification of what skateboarding represents. It’s all about equality, progression and individualism.”

Amar reverberated Mikey’s praise, calling him a, “gentleman and all-round good sport,” saying that being introduced to the program together has been extremely helpful. “We’re able to reflect off each other, plan together and correct one another. It helps us to be more effective in doing our part for both women and men in the sport of skateboarding.”

Skateboarding was this year approved to feature at the 2020 Olympic Games in Tokyo, a historic event both athletes have in their sights.

“I’ll be attending all of the Australian Skate Federations’ Olympic Camps and doing everything in my power to represent Australia,” Mikey said.

“It’s once in a lifetime; it’s cementing your name and legacy into the history books of skateboarding forever.”

“It gives due recognition to the sport of skateboarding,” Amar added, “It gives me and all skateboarders the bar to reach to be truly recognised as athletes.”

Like the rest of their cohort, Mikey Mendoza and Amar Hadid will return to campus this semester, boards in toe and ready for class. But on top of the typical lectures and late-night assignments, Mikey and Amar will be working to make their half-pipe dream a reality.