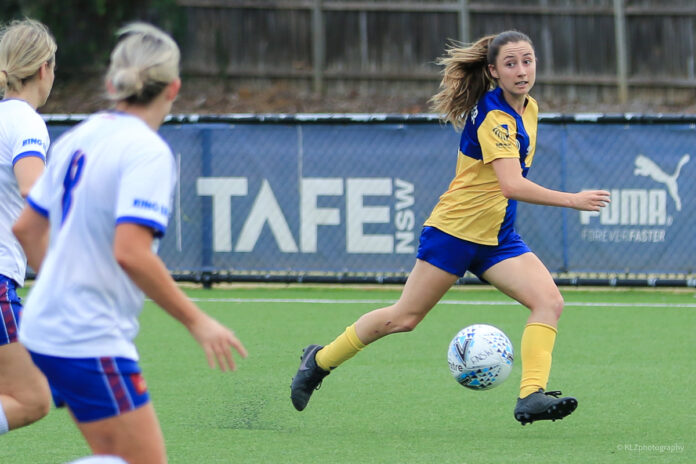 The rise and rise of Clare Wheeler through Australian women’s soccer ranks culminated this week with her call-up to the national squad, the Matildas.

Known in women’s football land as the ‘Midfield General’, Wheeler transferred to the NSW Sky Blues in the 2020-21 season to coincide with her enrolment in a Bachelor of Commerce degree at the University of Sydney. It was then the Sydney University Elite Athlete Program member linked up with SUSFC women’s side who are top competitors in the National Premier League.

Midfielder Wheeler, and forward Indiah-Paige Riley were added to the Matildas squad for this month’s training camp leading to an international match against Ireland at Dublin’s Tallaght Stadium on September 22.

And what a time to be called into the national squad. The September training camp and inaugural ‘friendly’ against Ireland marks the beginning of a new international cycle that will include the 2022 AFC Women’s Asian Cup, the 2023 FIFA Women’s World Cup to be hosted by Australia and New Zealand, culminating in the 2024 Paris Olympic Games.

For the 25-member Matildas squad, many of whom competed at the Tokyo Olympic Games, the Dublin international is the start of something new.

Matildas head coach Tony Gustavsson said there was some “unfinished business” to attend to after Tokyo where the Matildas made it to the final eight before bowing out 4-3 to the United States in a heart-wrenching bronze medal match.

“While there were many aspects of our Tokyo campaign that we were proud of, I share the strong sentiment of the playing group that there is still unfinished business,” Gustavsson said. “It is what makes our whole team extremely motivated and energised for the next phase of this journey towards the FIFA Women’s World Cup in 2023. We have analysed our performances and have some great insights for us to work with.

“However, as we keep working to improve all areas of our game, we will ensure that our aggressive pressing game and our attacking mindset will always remain at the heart of who we are.”

No doubt ‘Midfield General’ Clare Wheeler will be part of the coach’s mindset. And that could result in World Cup and Olympic Games representation.