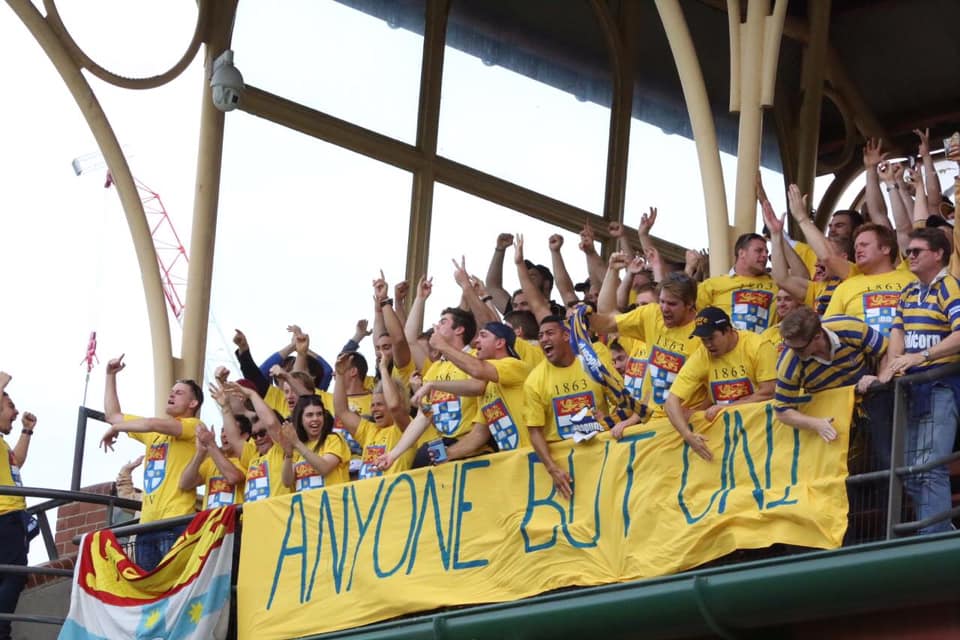 The buzz around club rugby is rife. There is no greater evidence of this than the 15,500-strong crowd that packed out North Sydney Oval to watch Sydney University thump Warringah, 45-12 in the 2018 Shute Shield Grand Final.

“When walking out of the sheds through a tunnel of blue and gold fifty metres long I had goose bumps on the back of my neck, and pride in my chest,” University prop Paddy Ryan said, in a column he penned and published on the Super XV website.

“The electric energy coming off the crowd was contagious… they oooo’d and ahhhh’d, they cheered and booed, they encouraged and they sledged.”

Sydney University Football Club has arguably become the face of club rugby’s renaissance; crowned champions of a competition that attracts rugby-lovers genuinely excited by a Saturday afternoon at the footy among friends. You’re physically close to the field watching the high-quality action, familiar with the club, the players.

The stands in North Sydney were peppered with bright yellow University shirts, an enormous show of support for the Student colours with a tongue-in-cheek ‘ANYONE BUT UNI’ banner stretched across the railing, a turn of phrase used in club rugby-land which reflects the hostility towards Uni, but turned on its head.

The Students performed well across all grades in 2018 with firsts, seconds, thirds and fourths each progressing to finals off the back of dominant seasons. It was a different story for Colts who began their year slowly, regenerating at the backend of the season for each group to enjoy a competitive finals berth.

Together, the Club won the prestigious club championship for the fifteenth consecutive year.

While it was only First Grade who claimed a premiership for the men, Sydney University Women’s Rugby Club powered through their season undefeated to reclaim the 2018 Jack Scott Cup. Also defeating Warringah, 38-17, the self-proclaimed Lionesses personify the club culture growing in the men’s game with a supreme sense of community.

Sydney University backrower, Grace Hamilton agreed, saying the women’s club have always had not only a robust culture, but a hugely strong playing program and talent pool.

“We had a really solid season – we basically had the same team for every single game and in the final I think that showed,” she said. “It was such a fun year, and with a new bunch of girls too. Every season is great, but this year was a particularly great experience.”

Hamilton’s rugby career goes beyond competing for Uni at the club level, representing the Waratahs in the winning NSW Women’s Buildcorp Super W side in 2018 and being called up to the Buildcorp Australian Wallaroos for her 11th cap against New Zealand in August. However the Elite Athlete Program member who is completing her Masters of Teaching (Secondary) at the University of New England says playing for Sydney University holds a special place for her.

“My heart lies in club rugby,” she said. “Club rugby is how you get to where you are. I had a lot of different people asking whether I’d come back to play the grand final for Uni, and my answer was always ‘of course!’ I wouldn’t have missed it.”

Another formidable talent representing the Student colours is Guy Porter, also a current scholarship holder at the University of Sydney in his fourth year of a combined Bachelor of Commerce and Law degree.

He joined the Students in 2014 and played centre in the number-13 jersey for all but two games this season.

Heading into 2018, Guy remarked his aim was to, “stay on the field and be part of a winning team,” and says achieving this was incredibly satisfying. “The feeling in the moment was pure elation – it was the culmination of a lot of hard work,” he said.

“We set high standards for ourselves in 2018 and early on, set our eyes on going all the way to the grand final having not made it last year, so to get there, and win it, was very satisfying indeed.”

Reflecting on the game itself, Guy said the support shown for Uni on the day was proof of how special the club is.

“It might be a cliché to say but it really was a club effort this year. There was, and is, such a high standard across all teams which means everyone lifts, and that really drove the first grade team,” he said.

“It creates a special atmosphere – the phrase thrown around is ‘tribalism’ and I think that’s probably true with what we’ve experienced at Uni this year, and really unique to club rugby at the moment.”

Discussing the feeling around club rugby this season, Guy said one needed to look no further than grand final day to see the passion for the game, saying this was felt throughout the regular season too.

“Home games are obviously great, but it’s also a pleasure at away games to go to awesome venues where you meet people who love their club and are really passionate, week-in-week out. You see it with volunteers and staff too – people who are willing to come out on a Saturday to support the team they love.”

However, spectator numbers and premiership wins are not the only measure of growth with both men’s and women’s clubs passing resolutions to merge.

It seems as though the merger has already taken shape with Grace commenting on how important collaboration was this season past. “The feel amongst the women’s club was so much better and it really was because of that connection,” she said.

Guy agreed, saying the opportunity to build upon the two great clubs is only a positive.

“Any synergy we can build upon is awesome.” The individual success of both clubs – historically and today – is irrefutable, proven by not only their recent premierships, but the plethora of Wallabies, Wallaroos, Super Rugby, Super W, NRC and Uni 7s representatives each program has produced.

So, one can only imagine the success that will ensue off the back of a combined men’s and women’s club. As it currently stands, it doesn’t seem like we’ll be waiting too long to find out.