After putting in a gutsy performance and leading for the majority of the race, they held on by 0.37 of a second to secure the win. Purnell, who rowed in the bow seat for Australia, edged out Romania and Italy to finish on top.

Both men who joined SUBC in their senior years of high school, over the years, have represented Australia at Junior and Senior World Championships and were a part of the Australian eight that won the 2018 Grand Challenge Cup at the Henley Royal Regatta. After three years of unwavering dedication and hard work, the pair become SUBC’s first-ever Olympic gold medallists.

After winning a silver medal in Rio in the men’s quadruple sculls, Cameron Girdlestone has become the first-ever SUBC rower to win medals at two Olympics, securing a bronze to add to his Olympic medal collection.

Girdlestone teamed with Jack Cleary, Caleb Antill, and Luke Letcher secured third place in the men’s quadruple sculls behind The Netherlands and Great Britain. Although being deprived of international racing, the five-time Australian national champion proved his place among the world’s best.

Rowena Meredith and Harriet Hudson teamed with Ria Thompson and Caitlin Cronin, claimed their Tokyo bronze in the women’s quadruple sculls behind China and Poland. In the lead up to the Games, the crew headed to Lucerne, Switzerland, to compete in the final Olympic Qualification Regatta. This racing experience was beneficial for them, and in a hard-fought final, the girls came from behind to cross the line in third place.

The pair, at separate times, have claimed National Champion titles at the World Under 23 Championships and had podium finishes in the World Rowing Cup.

Although there weren’t podium finishes for everyone, the journey to the Olympics is not for the faint-hearted.

Only 21 years old, Tara Rigney made her Olympics debut, competing in the women’s double alongside Amanda Bateman. They finished third in their heat and fifth in the semi to then head and contest the B final. After a gutsy race, they finished as seventh in the world. A strong result in a competitive boat class.

Another dual Olympian, Nick Purnell, was in the men’s eight alongside young debutant Jack O’Brien. The Australians had qualified for the final after finishing fourth in their heat and fourth in the repechage. Booking their spot in the final, they were not able to match the top crews and finished 6th overall.

The nine rowers are a testament to the Sydney University Boat Club. Being one of Sydney’s first rowing clubs, over the past 161 years, it has been at the forefront of both domestic and international rowing, contributing a multitude of athletes to state and national teams.

When you come from a “home” like that, anything is possible. 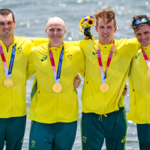 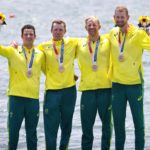