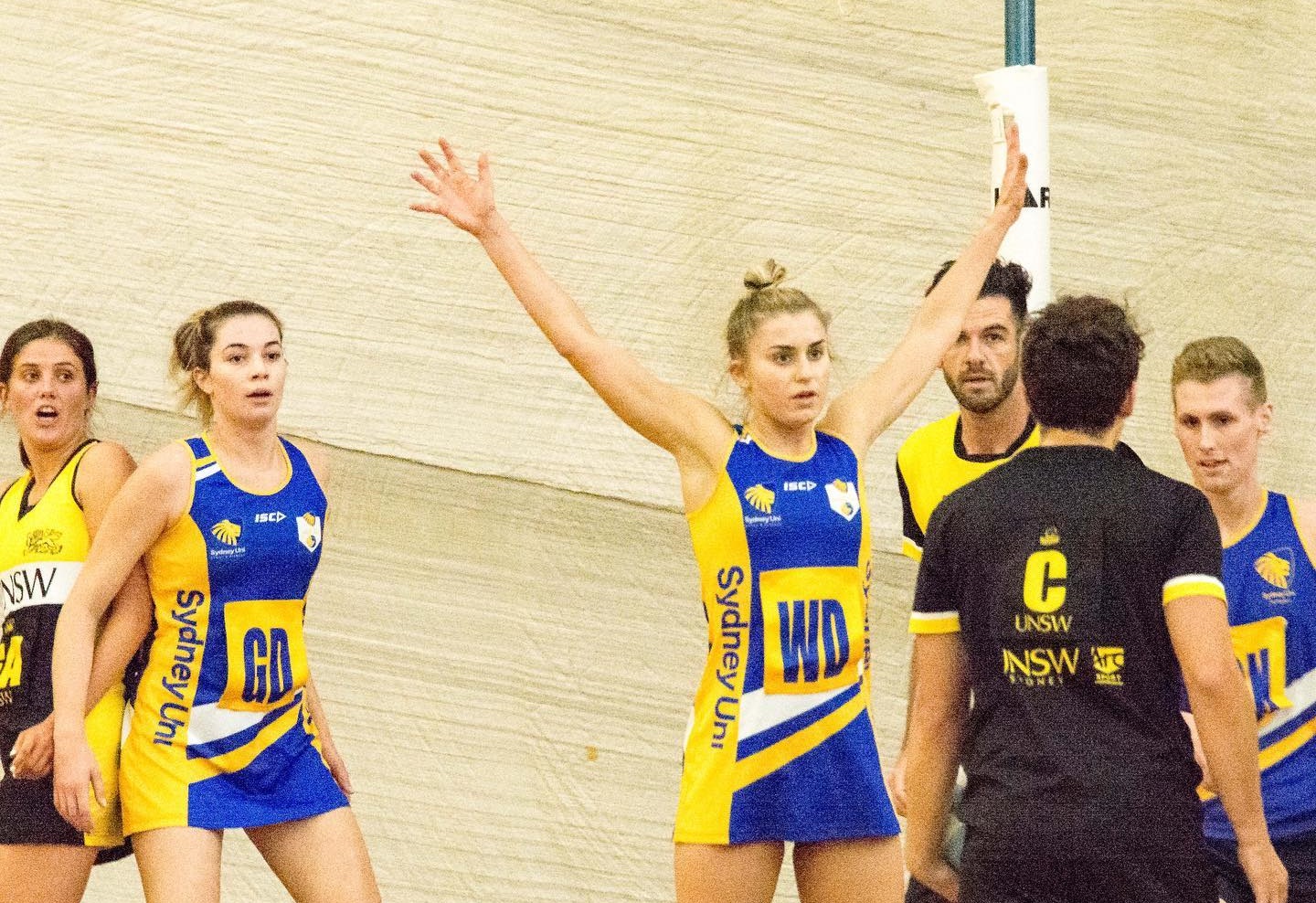 Mixing sport and study, both at a high level, makes for a busy life, but netballer Mikaila Knezevic wouldn’t have it any other way.

Mikaila is now in her fourth year on the Sydney University campus, completing an undergraduate honours thesis to close out her degree in civil engineering. She’s also playing in the Netball NSW Premier League competition with the UTS Randwick Sparks – Sydney University doesn’t have a team in the top league.

But she has strong ties with the Sydney University Netball Club (SUNC) through the Sunday afternoon Teal Cup competition and at the annual University Games. And she’s a member of the club’s executive.

“I’ve been on the executive since 2019 and part of the long-term vision of the club is to field a team in Premier League,” Mikaila said. “When I came to the campus in 2018 SUNC had just paired with the Inner Western Suburbs Netball Association in the previous year and competed in the NSW Metro League, our most competitive level of netball. We won the title in 2017, which was a great thrill and finished runners-up in 2018.”

Having started out as a defender in her early years playing in the Inner West before moving to wing defence where she has made her mark, her 2017 efforts were rewarded with selection in the Premier League for the past two seasons.

Throughout that time, Mikaila has been on the Sydney Uni Sport Scholarship Elite Athlete Program which she credits with helping her in many ways, starting with the adjustment to campus life after completing six years of schooling at St Scholastica’s College at Glebe.

“When Sydney Uni and the Inner West clubs merged in 2017, I met Isobel McCalman, who was the SUNC president and a player, at the trials for the following season. She suggested I apply for the EAP and it has been fantastic, particularly in the first year. They offered tutoring to help with adjusting to university life. They also helped me get into the Premier League club. They couldn’t be more supportive. I’ve also formed some great friendships and connections through the program.”

Indeed, the EAP has just assisted Mikaila in gaining an internship with Thelem Consulting, an infrastructure and property advisory firm covering a wide variety of sectors, including urban renewal, health, transport, residential, aged care, commercial office and mixed use, utilities and education.

“It provides opportunities for the sports scholarship holders,” she said. “In Mikaila’s case, the internship is a wonderful opportunity with a leading consulting company. It shows that the academic side of the sports scholarship program is just as important as the sporting element. Internships like this one can set up the EAP scholars post university and post sporting career. We’re hoping to expand the internship program to cater for athletes in other fields of study.”

Allegra Bauchinger, a Senior Consultant at Thelem Consulting, said the firm has been running the internship program for the past three years. “We typically seek to engage interns for an initial minimum 12-month period,” she said. “We find this allows ample time for interns to grow and develop with us as they work on a variety of projects. Mikaila is currently working with Infrastructure NSW on the Central Barangaroo development, providing contract administration and project support. She has previously worked on projects such as the redevelopment of Cockle Bay.”

Ms Bauchinger said Thelem Consulting plans to continue with the internship program. “We find that this is a great way for interns to gain experience working on large, complex projects at an early stage of their careers and for Thelem to develop the next generation of industry leaders,” she said. “We have a structured program to make sure that growth and development are maximised during the intern’s time with us. We see the value of a genuine partnership which creates real long-term benefits for the intern, the business, and the industry as a whole. Subject to performance, all interns have the opportunity to become full-time graduate employees when they graduate.”

Graduating from university won’t stop Mikaila’s association with SUNC or the sport. She not only has ambitions to help get the club to the next level, she also has plans to play at a higher level. “Gaining a spot in the Sparks provided an opportunity for selection into the Academy for the NSW Swifts (who play in the national league),” she said. “I’d like to trial for the Swifts Academy at the end of the year.”

Mikaila was in the Sparks side that won the Premier League title last year and says successfully defending the title this year would help her cause in gaining a berth in the Academy.

That’s a long way up the ladder from her early years in Inner West competitions. But mixing honours studies and an internship while playing netball for two clubs is Mikaila’s way; ambition and achievement make up her DNA.