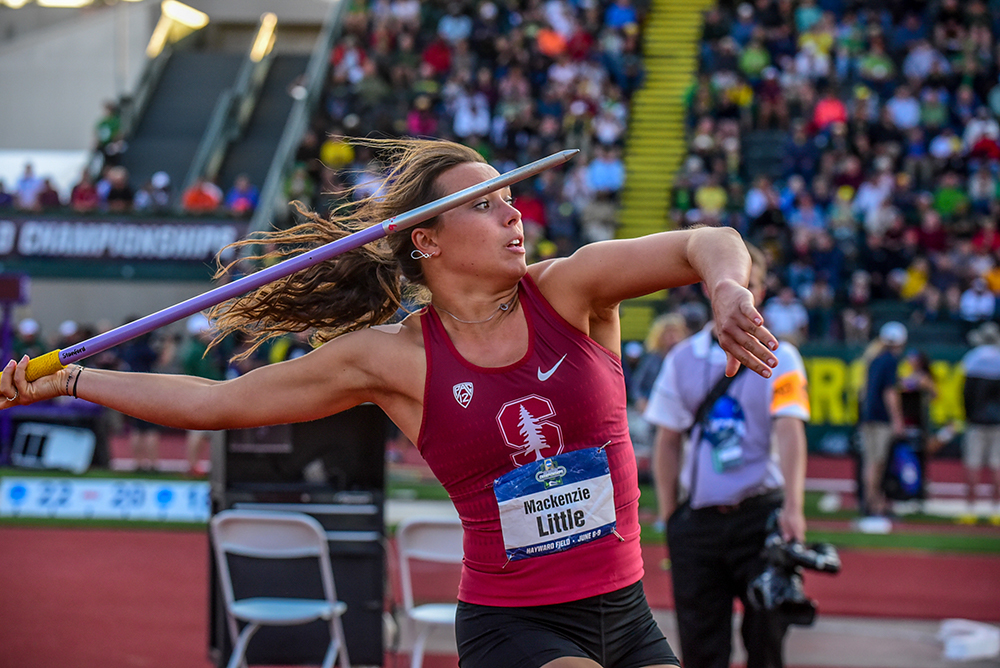 The number 64 is firmly embedded in the psyche of Sydney University Athletic Club’s javelin star Mackenzie Little. It’s the distance – in metres – she needs to throw to secure a berth to the COVID-delayed 2021 Olympics Games.

The first year medical studies student is in training for the start of the Australian Olympic qualifying period with a series of meets starting later this month.

“I’m hoping to build up points during the qualifying period to make the 32 who will be invited to Tokyo,” she says. “I’m out of the COVID bubble and settling into a routine with my new Sydney coach Angus McEntyre, who also trains his younger brother Cameron (also training towards selection on his first Olympic team).

“During the COVID restrictions we were able to train in Angus’ personal gym and then later at Homebush and Narrabeen. I’m in the best shape I’ve ever been.

“I’m excited and confident about making the cut. I threw a personal best – 61.42m – a few weeks ago and if I keep up that level I’m excited about throwing 64m and going straight onto the ‘magic ticket’. I’m a chance for Tokyo.”

Should she make the final cut of 32 it will be the culmination of a long and interesting javelin journey.

As a junior athlete Mackenzie was competitive in the 400m hurdles, high jump, long jump and heptathlon before taking up the javelin in high school when other events were postponed because of rain.

She first came to the attention of athletics scouts when she won gold at the 2013 World Youth (Under 18) Championships at Donetsk in the Ukraine with a PB and championship record throw of 61.47m with the 500 gram implement (Open competitions use a 600 gram javelin).

At the time she was a 16-year-old student at Pymble Ladies College on Sydney’s north shore and being coached by Annabel Davies who, along with her parents Allison and Nicholas and three younger brothers, Charlie, Austin and Zac, had flown half way around the world to support her.

Mackenzie threw 57.29m with her first attempt in Donetsk and looked in good stead. But Cuba’s Yulenmis Aguilar then unleashed a 59.94m effort, almost five metres farther than she had thrown before. The competitor in Little emerged and her next throw was a PB by more than four metres to claim the title.

“After not such a great start in the qualifiers, I was very happy to throw out a big one. It was just fantastic. Thank goodness I could put it out there in the final,” Little told the IAAF’s Phil Minshull at the time. “I was happy with my first throw but I knew it wouldn’t be enough. I tried to not let myself get carried away and I just tried to keep focused. I just did what my coach had been telling me to do and it happened to go out there so obviously I was really happy with that.”

Mackenzie qualified for the 2014 World Juniors at Eugene, Oregon, in the US but couldn’t attend because they coincided with her Higher School Certificate exams. The decision to concentrate on the HSC was to have unusual ramifications.

“When I finished the HSC at PLC I had to decide whether to start my medical studies in Australia or take up a Sporting Scholarship at Stanford University,” said Mackenzie, who was on the Pymble Elite Sportswomen’s program established in 2007 to recognise the need to support students who compete at elite levels to meet academic demands. Mackenzie’s connection with Stanford University was initiated through her involvement with the Elite Sportswomen Program.

“It was an amazing opportunity to compete and study in the US – but a very tricky decision to make. It would have been quicker to get into medicine by staying in Australia as an undergraduate, but in the end I decided to try Stanford for a year to see if I liked it.

“Starting in athletics and javelin in Little Athletics and then at Pymble led me to represent Australia and be internationally recognised in sport, which gave me the platform to communicate with Stanford.”

Mackenzie took to the lifestyle on the Stanford campus and having finished a four-year Bachelor of Science degree in Human Biology she’s now started a medical degree at the University of Sydney.

During her time at Stanford, she also enjoyed a stellar sporting career competing for the University, which included four consecutive Pac-12 women’s javelin titles, the last of which came after midnight following a lightning-delayed competition in Tucson.

Little set a meet record of (59.13m to extend Stanford’s run of consecutive titles in the event to eight, following the career sweep of Brianna Bain. Little was the fourth in conference history to accomplish the feat and became the fourth different Pac-10/Pac-12 women’s javelin champion from Stanford.

The Pac12 conference meets are a progression to regional championships in US west and east coasts, which lead to qualification for the Nationals. Little went to four NCAAs, winning the last two she attended.

“In third year I won with a (then) lifetime best in Eugene, a small town in Oregon and home of the Haywood “Magic’ Field,” she said. It was a reflection of the strong partnership she had built with her Stanford coach, Zebulon Sion, and the first NCAA title for them both. “I’m hoping to return there for next year’s World Championships after the Olympic Games.”

Leading into her fourth NCAA the weekend before Stanford’s fourth-quarter finals, the University’s only women’s javelin winner ever and defending champion said she preferred to keep busy. “That is always a thing and it will be again this year,” she said. “We’ll be going off and studying in the hotel and then competing and then studying some more and sitting those exams. Some people think it probably is less than ideal, but I must say that if I was at another school, just hanging out, just training, I think that wouldn’t suit me as much. I really need some balance.

“I’m definitely more productive when I’m busy. I’ve noticed that in the periods of my life where I haven’t been exercising as much or doing as much intellectual or curricular stuff, then I’m just not as happy and energetic and productive. It’s a perfect balance because training is the perfect release from schoolwork and I love being with my teammates and it’s a great social time as well.”

In technical terms, Little said her biggest challenge is patience. “Particularly in competition,” she said. “I will come so energised and ready to go that I’ll open up my left side really early. I’ll tighten up and shorten everything and come around really quickly. Whereas it is better at that point of the throw to be long-armed and loose and flicky. When I’m coming down the runway, one of the big things I’m thinking is just to be relaxed and to be calm and long. That’s what we usually try to work on.”

Little was born in the US and has dual citizenship. Her parents, both physicians, were working at the Mayo Clinic at the time. “I’ve spent two weeks of my life in Minnesota,” she says, “but they happened to be the first two.”

While at Stanford in 2016 she pulled the citizenship card to compete in the US Olympic Trials. A year later she again entered the USATF meet, but at a week before the event was told she was ineligible because she had represented Australia at the World Youth Championships in 2013. “It’s never been a big deal,” she said at the time. “The US nationals is such a fantastic, high-quality meet there’s no reason why I wouldn’t want to compete there.”

She threw for Australia in the World University Games later that summer, which certainly sealed her affiliation under IAAF rules. And she just missed out on Australian selection for the 2016 Rio de Janeiro Games.

Because of the different semester times between the countries, after finishing her degree at Stanford Little had six months free time before starting at Sydney University and used that to compete in Europe. “I didn’t compete that well, but it was a great experience,” she said.

“Competing in countries like Belgium, Italy, and Sweden, added an invaluable amount to my international experience and I know that will serve me well in the coming years”.

Little has no regrets about the four years at Stanford. “I enjoyed every moment,” she said. “But it’s nice to be back with my family and starting medicine at Sydney University.

“I’ve just started at Royal North Shore Hospital, my allocated hospital, once a week and I’m really enjoying it.”

She is eager to progress her javelin career in tandem with medical studies with the aid of Sydney University’s Elite Athlete Program and a sporting scholarship, which supports Mackenzie in navigating her demanding full-time degree with training at an elite level.

“Sydney University also has a prolific athletics club, SUAC, and I’m thrilled to be joining the ranks of some really talented athletes here. Deano (Dean Gleeson, Director of Athletics and Head Coach) and Meso (Andrew Heil, Registrar and Treasurer) have been so welcoming to me and clearly run a well-oiled machine.”

As for the 2021 Olympics, they’ll be in Tokyo, the city that last hosted the Games in – 1964. There’s that number again, Mackenzie.

Mackenzie Little was selected in the 63-strong Australian Athletics Team that will represent the nation at the Tokyo Olympic Games in July 2021, 11 of whom are proud members of Sydney University Athletics Club (SUAC).